Doxycycline is a broad-spectrum bactericidal antibiotic belonging to the tetracycline class. It is a relatively safe drug with reported side effects such as gastrointestinal symptoms, discoloration of bones and teeth, sensitivity to light, and renal toxicity. Acute pancreatitis (AP) is an uncommon adverse effect with only a few cases reported in the literature. Although tetracycline has been described as a possible causative agent of drug-induced pancreatitis (DIP), doxycycline has rarely been implicated. Here we present a case of a 65-year-old female patient who developed doxycycline-induced pancreatitis after inadvertently starting a drug for community-acquired pneumonia. The most common causes of pancreatitis were excluded during her hospitalization and she was subsequently diagnosed as DIP. It was successfully treated with discontinuation of the offending agent and supportive therapy. It is critical for clinicians to be aware of the possible association between doxycycline and pancreatitis to further aid diagnosis and prompt treatment of this condition.

Acute pancreatitis (AP) is a severe disease that affects approximately 45 out of every 100,000 people annually [1]. Gallstones and alcohol are the two most common causes, accounting for 70%-80% of all cases [2]. Other less common etiologies include autoimmune disease, hyperlipidemia, hypercalcemia, endoscopic cholangiopancreatography (ERCP), infection, trauma, inflammatory bowel disease, ischemia, and tumors. [1-2]. An extremely rare cause of pancreatitis is drug-induced pancreatitis (DIP) with an estimated incidence of only 0.1%-2% [1-2]. The World Health Organization has reported 525 drugs associated with AP and a direct causal relationship in 31 drugs. Although tetracycline has been described as a possible causative agent of DIP, doxycycline has rarely been implicated. [1]. Doxycycline is a drug commonly prescribed for a wide range of bacterial infections including soft tissue infections, respiratory infections, sexually transmitted diseases, and Lyme disease. [2]. AP is an uncommon adverse effect with only a few cases reported in the literature. Given how commonly doxycycline is prescribed clinically, it is essential that clinicians are aware of the serious adverse effects associated with the use of doxycycline including DIP. We hope to build on existing knowledge and strengthen the association between doxycycline use and pancreatitis by providing a rare case report of a patient who developed recurrent pancreatitis after taking doxycycline.

A 65-year-old woman with a previous medical history of DIP, rheumatoid arthritis (RA) and community-acquired pneumonia (CAP) presented to the emergency department with a major complaint of nausea, fatigue, and epigastric pain radiating to her again within the past two days. The pain was rated 8/10 in severity, worse with eating, and occurred consistently throughout the day without any mitigating factors. The patient denied any recent changes except for the fact that she had started taking doxycycline three days earlier for her treatment. The patient also denied any history of smoking, alcohol, insect bites, stings, trauma, or recent endoscopic procedures.

Upon arrival, she had a fever of 100.4 degrees Fahrenheit and a tachycardia. Physical examination was significant for epigastric tenderness with no evidence of abdominal guarding or rigidity. Primary labs were notable for leukocytosis 33.9 × 103 μl and lipase 3,431 IU/l with unobserved levels of serum calcium, lactate, liver enzymes, and lipid plaque as summarized in the table. 1. Abdominal and pelvic computed tomography revealed peripancreatic fluid and fat consistent with AP (Fig 1). Then an ultrasound was performed in the right upper quadrant and no gallstones or bile duct distention were visible (Fig. 2). The lipid panel was also asked to investigate the etiology of pancreatitis, however, it returned within normal limits. Because of her history with RA, her IgG4 level was requested to exclude type I autoimmune pancreatitis, which was also unremarkable. Blood cultures were also withdrawn during admission due to fever and leukocytosis. However, no bacterial growth has been reported. Then I started strong intravenous hydration, antiemetics, and pain control. After excluding the most common etiology of pancreatitis, doxycycline-induced pancreatitis was diagnosed and doxycycline was discontinued. Her lipase improved to 573 IU/L on the second day, and 530 IU/L on the third day as shown in the table 1. She reported symptom relief with discontinuation of medication and supportive care. Upon further questioning, she stated that her last bout of pancreatitis also occurred in the setting of using doxycycline to treat cellulitis two years ago. She has refrained from using doxycycline since that episode, however, was inadvertently prescribed it and ended up with recurring symptoms. The patient was then discharged home in an improved and stable condition and instructed to avoid future use of doxycycline.

Table
1: Laboratories and related serological tests throughout the hospital stay.

appearance
Figure 1: Computed tomography of the abdomen and pelvis without contrast revealing evidence of pancreatic edema with peripancreatic fluid and fat wrinkles. 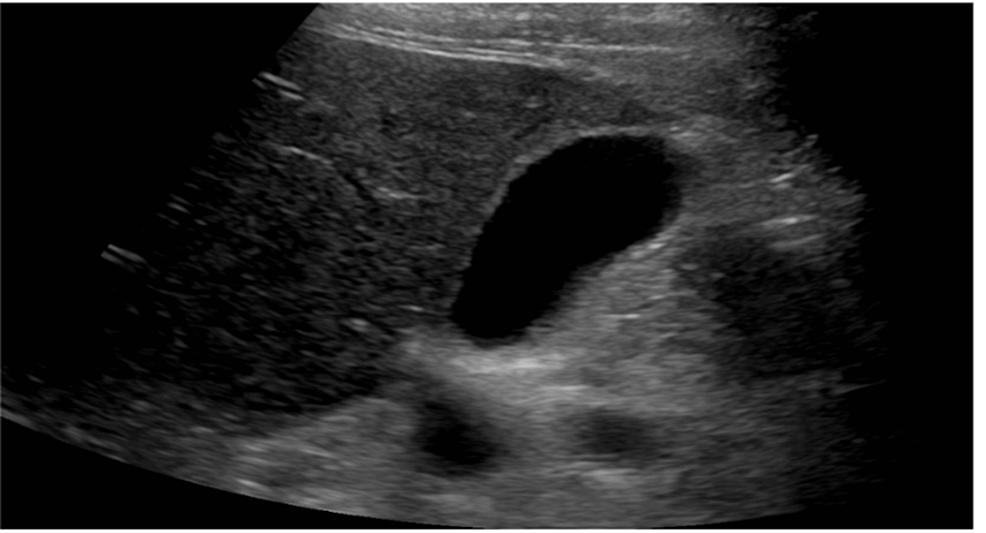 appearance
2: Ultrasound of the right upper quadrant reveals an unnoticeable appearance of the gallbladder with no evidence of gallstones or wall thickening.

Drug-induced pancreatitis is a rare phenomenon with an estimated total incidence of less than 2% of all AP . cases [1]. To date, 31 different drugs have been identified as specific causes of DIP with the most common being mesalazine, azathioprine, and simvastatin. [2]. Most of our understanding of this disease process is based on case reports that establish a causal relationship between pancreatitis and a possible offending agent in the absence of other common etiologies. The lack of clinical features of DIP makes it difficult to diagnose and further complicates it. Tetracyclines have been implicated as a specific cause [3] of pancreatitis and is classified under category 1 B of the Badaloff classification of DIP [4]. However, doxycycline remains an uncommon cause of DIP. To our knowledge, only six cases of doxycycline-induced pancreatitis have been reported in the literature with it being one of the first reported cases of recurrent pancreatitis. [5].

The most common causes of AP are alcohol use and gallstones make up 70%-80% of all cases followed by hypertriglyceridemia and procedures such as endoscopic cholangiopancreatography (ERCP) [6]. Other, less common causes are usually patient-specific and include autoimmune causes, infections, and trauma. As seen in the case presentation above, the most common etiology of pancreatitis was initially excluded as she had no history of significant alcohol abuse or recent endoscopic procedures such as ERCP. Right upper quadrant ultrasound was negative for gallstones and serological tests showed normal lipid levels. Furthermore, she denied any ticks, insect bites, travel or trauma. Autoimmune pancreatitis was also considered as a potential differential given her history with RA, however, she tested negative for IgG4 antibodies. Thus, we were able to eliminate the above as reasons for its AP. However, her recent use of doxycycline to treat her vascular scars just three days before her symptoms began raised DIP’s suspicion.

Our patient developed pancreatitis within three days of exposure to doxycycline and his symptoms resolved immediately upon discontinuation of the drug. DIP is diagnosed after the common etiology of pancreatitis has been excluded, followed by clinical improvement after discontinuation of the offending agent as described in the above case. However, in addition to discontinuing doxycycline, she was also concurrently treated supportively for AP with bowel rest, intravenous fluids, antiemetics, and pain control raising the question as to whether the etiology of pancreatitis was actually drug-induced or idiopathic. .

Our patient’s history of a similar episode of AP 2 years ago in setting the use of doxycycline more favors the diagnosis of DIP as the most likely etiology. It also scored eight on the Naranjo Adverse Drug Interaction Scale, revealing a possible adverse reaction to doxycycline adding to our suspicion of DIP. This case is particularly unique as there are no documented cases of recurrent pancreatitis due to doxycycline use to our knowledge.

Various theories have been proposed to explain DIP as each class of drug is believed to have a unique mechanism [4]. It is assumed that tetracyclines can cause DIP either through a toxic effect mediated by an unknown metabolite or a direct toxic effect on the pancreas due to the supra-therapeutic bile concentration of tetracyclines. [7]. Pharmacological trials with tetracycline showed that the concentration of bile minocycline was 10 times higher than that of the serum, and similar results were observed with tigecycline. [7]. These findings could help explain doxycycline-mediated pancreatitis given that minocycline and doxycycline are both group 2 tetracyclines and have similar pharmacokinetic profiles. [8]. However, more research is needed to explain the exact pathophysiology of doxycycline-induced pancreatitis.

Doxycycline is a commonly prescribed antibiotic and in rare cases, it can cause DIP as described in the above case. Clinicians should be aware of this potential adverse effect and should maintain a high degree of suspiciousness in patients who have recently received doxycycline and display features suggestive of pancreatitis. DIP is a diagnosis of alcohol exclusion, gallstones, hypertriglyceridemia, and underlying electrophysiological abnormalities that are first ruled out as possible causes of pancreatitis in the patient. Management constitutes early identification and cessation of the offending agent resulting in resolution of symptoms.